A design studio of one

With lots of help on call when it's needed. 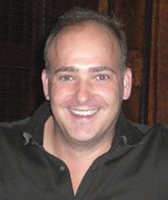 All the work listed on this website was created by just me. Christian Johnson.
That's me up there in my pajamas proudly displaying a copious amount of raspberry jam on toast. I was a bit younger then. A slightly more recent photo is on the right.

Your business is part of you, it's what you do and it's how you spend your time. Your business is probably what you think about quite a bit - even when you're not at the office. It's important to know who you are hiring when choosing a designer for your business. So, with that in mind.

I graduated from American University in D.C. with a degree in Graphic Design some years ago. Shortly after graduating, I moved to Los Angeles, C.A. and ended up staying for five years.

The first job was at a design firm that specialized in consumer branding and packaging design. Their clients included The Disney Corporation and Mattel among others. I was part of a team of designers that created the packaging design for toys and consumables directly tied into Disney movies and Mattel products. It was a great learning experience.

The second job was for a much longer stretch but was also the most educational. It was the beginning of the internet boom and somehow I landed right in the middle of it at a young internet startup. The startup dealt with movie and television casting and I was one of the original employees. The business was built around a database of actors and acting skills that enabled a casting director to search very specifically to fill a role. It was revolutionary at a time when acting resumes were literally stapled to the back of a headshot and each resume had to be read individually to find a particular skill. Our database and website did all that in seconds, saving hundreds of hours in casting research. Our little company became very popular, very quickly within the Los Angeles casting community. Thrown into the internet deep end, I was forced to learn how to hand code HTML, design websites, program a database and monitor web servers (as a reference, this was around the time Amazon.com went public on the NASDAQ). All this while working very long hours and being part of a small team that created a business and helped transform the casting industry in Los Angeles. However, I missed the east coast and left to come back home to the DC area in late 2001.

Back in the DC area I was hired by a national newspaper to help with the design and layout of special issues and advertisements. After two years I convinced myself that if I didn't open my own design studio soon, I was never going to do it. So, I quit the newspaper, took a vacation with my girlfriend to Jamaica, came home and opened XianStudio, LLC in 2003. A few years later, I married that girlfriend and are now raising two small children together.

My family and I live in Olney, MD and I still like a copious amount of raspberry jam on my toast.